My wish was to attend the first ever live performance of the late Martyn Bennett's 'Grit' album, which was the opening concert of Celtic Connections 2015 this month. 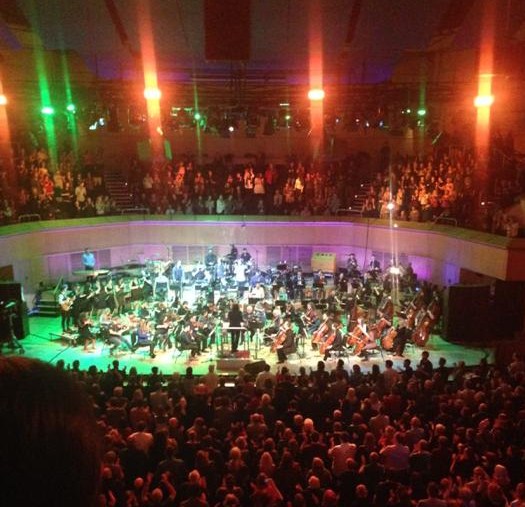 Of course, I did not go, but read that BBC Scotland was going to broadcast their recording on it last night, Thursday, 22nd January, at 9:30 pm.

I worked out the hack to include BBC Scotland in my 'Other Channels' on my Sky Box, and so we were ready to watch live !!!

The concert was conceived, arranged, and conducted by violinist Greg Lawson, from Newcastle and also violinist member of the Scottish Symphony Orchestra. His goal was to break out Martyn's electronic loops and samples into real instruments orchestral arrangements. Martyn was forced to record his final album using loops and samples as he had become too ill to perform with his musical instruments any more.

Now since I wrote this review, the concert has appeared on YouTube
song by song :-)  ... So let me share with you.

So here I review track by track, as I heard it ...

Bit of a rough start and had me initially disappointed, but here is a 80+ person orchestra and lots of voices all playing a piece for the first time and a sound balancing nightmare, so I was patient :-)

Fiona Hunter's voice did not seem the best for this, a bit screechy, I think I would have liked to have heard Mary McMaster or Eddi Reader with this one.

Update - I have watched this a few times now
... and its growing into being a favourite :-)

All's forgiven as the orchestra enter into this beauty of a song. The arrangements and sound start to become stunning. Fiona Hunter suddenly sounded great, though the lads attempting a Gregorian chant backing seemed to get a bit lost and a bit out of time, but I am nitpicking as by now we were really into an exceptional concert.

Everyone tried hard, but somehow lost the impact here. The orchestra needed more umph here, but the let down was lack of voices. This track needs a powerful gospel choir. Annie Grace, great singer for this, tried hard to lead the woman's chorus but their voices seemed thin and drowned. Having said that, Annie voice carried the children's song section of this track perfectly well. Good performance really, but I thought it lost too much of its edge, the chorus sounding tired and leglessly drunk rather than being a vibrant choral.

Actor David Hayman provided excellent voice for the Psalm 118 section of this, while singers Ann Martin and Catherine Joan MacDonald sang a lovely Gaelic version in the background, and all of this supported by a beautiful enchanting orchestra arrangement.

Starting off with a recorded poem, I think that blends into a beautiful surreal, enchanting, dreamy orchestration  ... then along comes Karen Matheson sounding like the angel she was in the earliest teen years Capercaillie. She comes across as being enchanted herself. I wonder if she will remember singing this :-) Yes, this is incredibly surreal and otherworldly ....

Oh, Wow! Wow! Wow! - to me this was the absolute highlight of the concert !!!
I loved the creeping arrangement introduction, incredibly haunting and magnetic. I just pulled you right in. Then the gritty vocals by Annie Grace was just perfect. The one let down was giving the sensual orgasmic moaning vocal part to Karen Matheson. It seemed she chickened out being shy and embarrassed 'doing it in public'. Perhaps they should have brought in Eddi Reader for that vocal part :-)

What a sensitive and hypnotic minimalist arrangement and performance this was. Extreme beauty starting with a delicate piano intro that smoothed into dreamy strings. Sensational!

Not all of the tracks from Grit were performed in this concert, well not on the broadcast, anyway. as I gather there were two encores. The missing tracks were were 'Rant' and 'Storyteller'.

Paisley Spin - from Martyn's Aye album and not Grit

The avante garde Paisley Spin was the last track of the concert, and perhaps the most complex for the orchestra to get around, but they did it with extreme skill and passion.

This was completed with a fusion of singer Rab Noakes voicing lines from Gerry Rafferty’s 'To Each and Every One of You'. The conductor, arranger and magician of all of this performance, Greg Lawson, gradually turned his baton towards conducting the audience who beautifully and soulfully joined in a chant of.

"To each and everyone of you
I say, "Goodbye, farewell, adieu"

... from the Gerry Rafferty song. This was one of the most moving moments I have ever experienced from a concert.


Of course there was an encore! :-) There was two!

On the TV we only saw one, though

Conductor, Greg Lawson took on the small vocal ... and then it was sheer energetic madness !!!

You could tell the orchestra thoroughly enjoyed themselves with this one by just letting everything go. This is a piece I believe every orchestra would love to do, to unravel. For this Celtic Connections orchestra, this encore was a present for them for providing such an amazing performance. For the audience, it must have fully recharged them.