by John Willmott - October 07, 2015
A Facebook friend, Boris Achenbach, brought to my attention a picture and introductory story about the Forest Of Dubhris featured on the Facebook Page of Celtic Mythology . 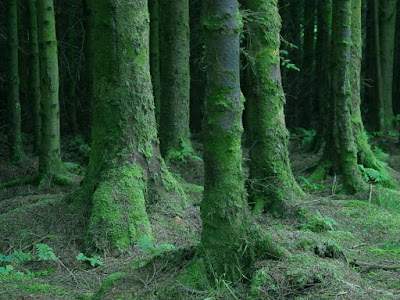 This is the story told by Celtic Mythology ...

The FOREST OF DUBHROS was the Dark Forest of County Sligo. In it grew a wonderful quicken rowan tree. It happened one time after the tree was grown, there were messengers of the Tuatha de Danann going through the wood of Dubhros. And they heard a great noise of birds and of bees, and they went where the noise was, and they saw the beautiful Druid tree. They went back then and told what they bad seen, and all the chief men of the Tuatha de Danaan when they heard it knew the tree must have grown from a berry of the Land of the Ever-Living Ones. And they enquired among all their people, till they knew it was a young man of them, that was a musician had dropped the berry.

Lovely symbolic story that I feel we could apply to many conditions, many stories, of our own lives. 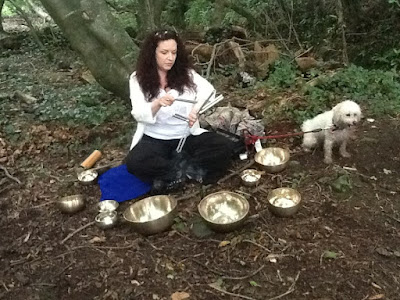 The way I could use it is considering the 'messengers' as being routines we set ourselves into once we have established something.  To me that 'condition' is much like that matured plantation 'fake' forest in the pic above. What a delight it is when we come into a 'clearing', take a moment to 'smell the roses' and see before us something of a new wonder, a natural wonder, probably something not created by humans but evolved out of the process of all nature. To me, these moments cause our own routines with our own creations as being quite insignificant for awhile. 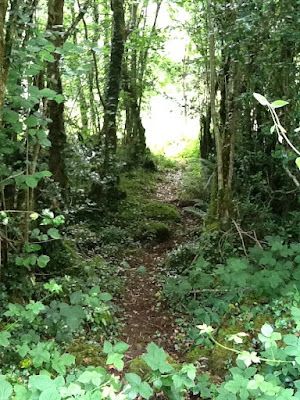 You may say, 'well its not about you, but a story of the Tuatha De Dannan!'

These stories are not 'historical'

... though it seems many people wish they were, and sometimes this sort of thing, the historical relevance and facts, turns up as heated debate within Facebook groups.

I see these stories as being mirrors for us now, but are made very interesting by including images of ancient people, their deeds and places. Fictional, but it gets our attention and we can learn a lot from this. 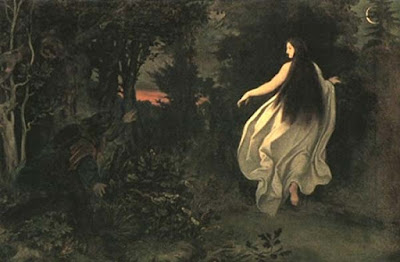 this is a Theodora Goss painting

The other debate, this has actually also happened in this Celtic Mythology thread, is

... where the Forest Of Dubhros is in Co. Sligo?

There are current forests around the county, specially around Lough Gill and on the banks of the River Unshin, that fit the description of Dark Forest, Dubhros, very well. In these forests there may be a few trees 1000 years old, or more, but most are under 100 years old ... being applied to a story that may be 4000 years old, a story that may well have changed 4000 times or more during that time. What about the forests long gone? 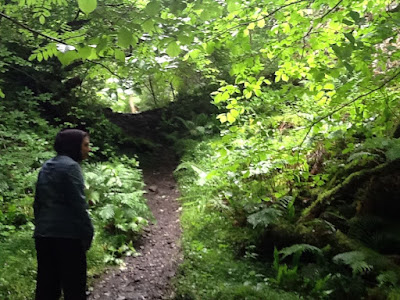 So, to me, the Forest Of Dubhros seems to be one of those places where the question is not where it is, but what is it saying? A Dubhros, often called Doorus or Durrus or Durroos or even Durrow in Ireland today is like Burren or Boireann meaning rocky place, so Clare Burren is not exclusive for this,

Duhros is a dense dark place in a forest or woodland.

Storytellers like to use this 'condition', including famous ones like the Grimms, to match with a light open space where there is a rowan or rose, abundant apple tree, big wise oak tree, etc.. 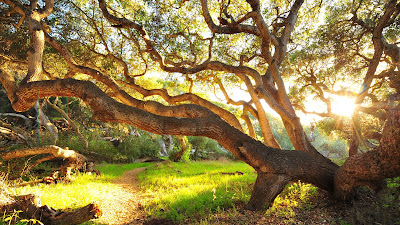 Even with that said it can be hard to accept and people will forever speculate a specific exclusive place for this name, or the place that inspired the 'original' storyteller.

When I have heard this Tuatha De Dannan story told,

... a common speculation is the Forest Of Duhros is somewhere along the River Unshin, the only river in Ireland to flow North. The woodlands of Markree Castle and Union Wood, once of the Markree Estate, beside the Unshin seem to be favourites. But, this location I have heard from storytellers that do not live far from the Unshin :-) 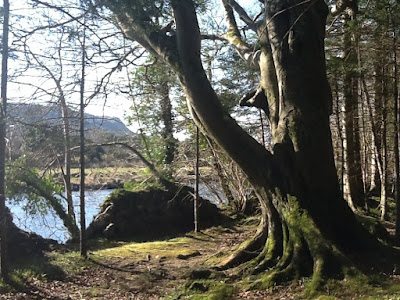 I think we have all been in dark forests and delighted at coming out into a bright part with sun shining through and noticing a special tree in that place. This is very common when we travel through a tree farm plantation forest and a bright gap, a space, reveals a native tree. Often its a rowan or hazel, which is a relief after passing 100s of spruces.

One local example, in Co. Sligo, is going through the plantation path to Labby Rock from Cromleach Lodge. 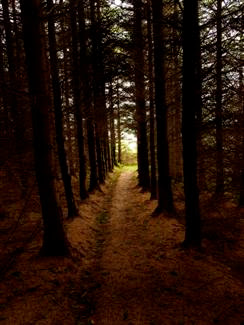 'The Forest Of Dubhros is a delightful storyteller's tool

... for including the conditions of evolving from dark to light within a story :-)

Today there are lots of modern plantation forests around Ireland, not just Co. Sligo, that are dark to walk through and get lost. To me they are truly today's symbol of Dubhros. Though mature with beauty in their root formations, note how life's diversity is minimal due to both its darkness and attempted uniformity. 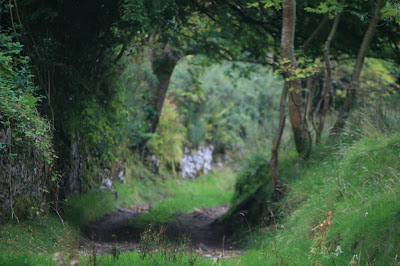 If we came from this type of dark forest into a clearing of trees set from the germination of seeds carried by wind, birds or animals rather than the plantation intents of humans, would we then think we have transformed from some kind of darkness to light? .

Instead of getting lost, I think we would find our way :-)

To me, this is what the story quoted by Celtic Mythology above may mean? 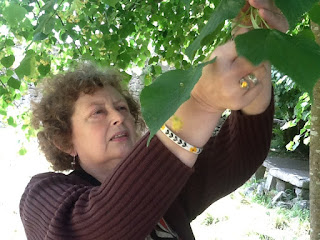