by John Willmott - November 08, 2015
It was a packed room for a performance of Yeats' Women, a show hosted at Woodford House on Sarurday, 7th, November. An audience of 52 people in a venue for 50, but it seemed like everyone was comfortable.

I had no thoughts about what this show would be but it turned out to be quite unique. There were three performers, left to right, actors Daniel Costello and Glynis Casson with singer harpist Claire Roche to the right. The were in a row wearing elegant formal clothes in. Setting that was elegant and formal yet beautifully warmed and glowed with rows of candlelight.

They looked like as if they were to serve a live broadcast of a story on the BBC in the 50s. All that was missing was the large ribbon mics. 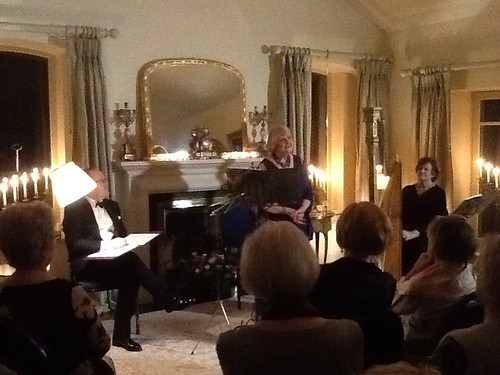 The show commenced with Claire Roche singing a popular W.B. Yeats poem that she has set to song, 'Lake Isle Of Innisfree'. 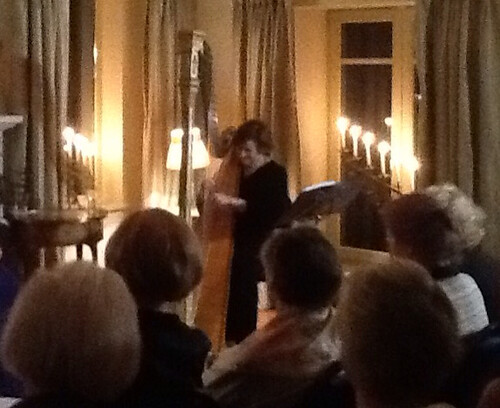 Glynis continued with a story of how WB's parents came together through challenges and poverty leading up to the birth of WB and his brothers and sisters. This moved on to WB's relationship with his mother and his sisters, who include Lolly. and her duties of managing the Yeats finances.

We were then moved on, and quickly, through WB's earliest romances, and Daniel started speaking too. At this point it did feel as if we had been transported into a landscape of listening to radio in a cozy sitting room and relaxing into our imagination as the story unfolded.

We hear of one of WB's sisters into an othworld life after a series of strokes, backed by Glynis and Claire performing Stolen Child.

And then we were onto Maude Gonne, that started with their meeting and the Salley Gardens song. From here on I feel the show could have been called 'Yeats' Women and Gonne's Men' as we learned just as much about Maude's romances too.

Glynis and Daniel moved through stories and poetry of Yeats, from his young love poems to maturing political concerns as he approached his middle life and several proposals to Maude Gonne later.

After about an hour, this first set completed with Claire performing 'He Wishes For The Cloths Of Heaven. This hour was paced well, constantly interesting and imagination tugging. I had no feelings of "oh, come on, lets have a break", like I feel at some dramas.

We returned to the show about 10 mins later, after the audience had indulged in water, bathrooms and smokes, Part 2 almost launched  right into WB's epic '1916' that was shared in performance by Glynis, Claire and Daniel.

We also heard of the troublesome marriage of Maude Gonne to McBride, the affairs she had while with him, through to regarding him as 'My Hero' after being shot after the 1916 uprising, and onto to WB proposing again to Maude, the widow, and after that failed proposing to Maude's daughter Iseult.

At that point Claire sang 'To A Child Dancing In The Wind'
which WB wrote about Iseult.

With Maude almost out of the story now, we hear of WB meeting George, and their shared indulgence with automatic writing, astrology, ouija boards and other tools of the occult and mystical. We hear of their time of being at Coole Park and Ballylee Castle and the quirks of raising the WB and George's children.

The final chapter of all of this show story, which was flashed through quickly, was WB getting a vasectomy operation when he was 69 years old. He discovered that the volume of his poetry writing at this time was matched by his sex drive.
He wanted to sustain both.

From 69 years old we hear of how WB tried to catch up his lost playboy years, that were lost trying to woo just Maude. At 70 years old onwards WB enjoy the pleasure and leisure of several young sexual playmate mistresses.

It was interesting to see the men in the audience grin, at this concluding point of the story, as many of them were around 69 years old
... and their wives giving them stern wondering looks.

This show expectedly finished with the poem 'Under Ben Bulben's Head' and the tune of  O'Carolan's Farewell.

After a standing ovation, we all then plunged into the Kitchen and Supper Buffet. Strangely, I took no pics of that, but what a great happy social craic we all had. 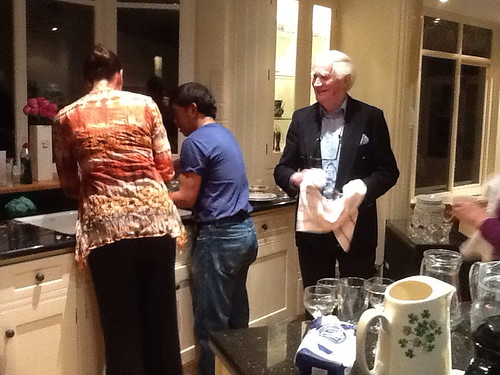 It must have been a great craic as some of the audience stayed behind an hour or two extra to help us clean up ...

... including Glynis, and the lovely Josephine, manager of the Glenmalure youth hostel, who are seen in this pic helping out too. 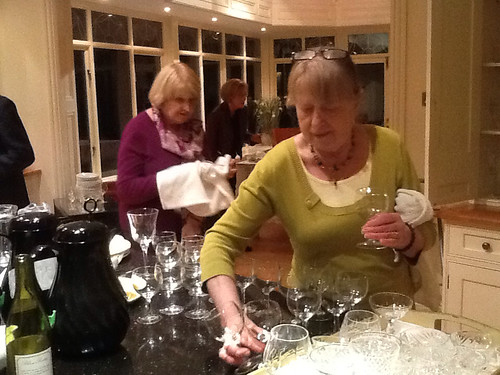 Just as we were cleared up, Claire asked if I was thinking of getting a vasectomy when I was 69 years old to. It's a four year waiting list for such a thing in Ireland. I imagined the local young woman doctor, I go to for check ups, writing a personal letter, as she does, to ask the specialist to speed up the date of the operation :-)

Would you like to go to this 'Yeats' Women' show?

There is another one at Woodford House next Sunday, November 15th, due to requests. Already there are just a few tickets left.

Highly recommended you book right away.