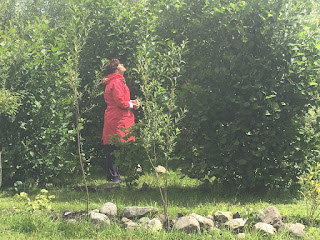 I will continue now with a location.

It is south of Sligo town, south of. Lough Gill and there is Lough Lumman. Surrounding this lough are the Ballygawley Hills. On those hills are the remains of ancient stone cairns.

Around 1974 was when I first heard the story of the Briefne chieftains being buried on the hills, covered by those stone cairns, so that as their bodies perished, the water from them would run down to the lough. Their spirit in this water rejoining the Cailleach’s womb through what is now Lough Lumman.

I have heard similar stories from other storytellers now, but surprisingly not a version from local wood carving storyteller Michael Quirke. He may tell it, but I have not heard it from him yet.

This fascinated me when I first heard this landscape story as I was also working on cleaning up the Sheela na Gig at the Nunnery on Iona, Scotland. I had imagined an origin of the interpretations of the carved stone Sheela na Gig. My image back then was also assisted by storytellers. I became very sure that there were landscape Sheela origins connected to water.

One thing that concerned me about this Lough Lumman story was the idea of these chieftains being described as some kind of heroes. 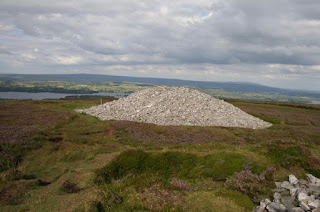 ...to return to blissful eternity by returning through the Cailleach’s womb.

The individual burial tradition seems to have started, in what is now UK and Ireland, around 500BC. There is little ‘evidence’ of this until AD years, though. Its the organic change of reverence from group to individual reverence that intrigues me, rather than the dates.

Within Harris Moore’s ‘Celtic and Prehistoric Museum’ near Ventry, Co. Kerry, his collection moves through stone, copper, bronze, and iron ages. This starts with stone age, copper age, and early bronze age tools for farming. But, through the later bronze aid weapons start to appear in the collection, and weapons are very abundant within the iron age collection.

All of this seems to coincide with the transition between communal to singular ‘hero’ burials.

From that display, my interpretation and my vision of a ‘hero’ was a person of battle and acquisition. I also thought of a ‘hero’ as someone who also defended the tribe from attempts from other chieftains and warriors attempting to seize what they have. 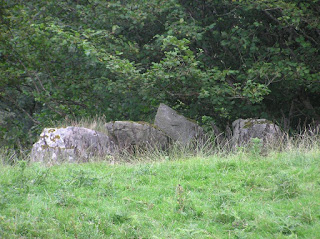 Even today, a person is revered at death
for the ‘hero’ life lived

... and this followed by an often argumented plunder of the acquired ‘loot’ at the lawyer’s office.

So far, this feature has been a long introduction to my response to a beautiful posting by storyteller Tony Cuckson, mainly on Facebook, as he shares his created pages for ‘A Journey With Mr Yeats’. Tony diverted a bit to include a beautiful interpretation of ’The Language Of The Hero’s Journey’.

To me, I was fully set into the imagery of a ‘hero’ being a leader of plunder. When someone broke out and ‘plundered’, with help from warriors and military, then the rest of the tribe may benefit from the ‘spoils’ brought home. 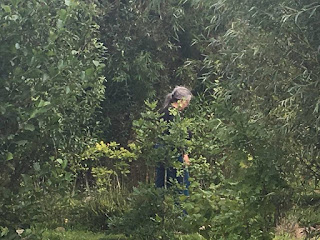 As tribes evolved into nations

Moving forward now to those comic ‘heroes’ in capes. With those DC Comic and Marvel Comic heroes, they seem to feature one man or woman, usually wearing a cape, with supposedly super human abilities. Within these comics, they seem to solve everybody else’s problems. But if any of their decisions did not work out right, the mass population would instantly dump the super heroes, and never support them.

I thought this was mean and ugly and both a tarnish of human selfishness and a so called ‘hero’ trying to live a superior life over everyone else too.

These days, the so called holistic facilitators often turn up in capes ... and I start thinking of those DC Comic ‘heroes’. Is this what they are trying to achieve?

So when I was presented with the concept of a ‘hero’ as being someone called into a holistic life through going from mundane ‘do as you are told’ living to adventure, facing a task, earning an elixir, returning it to the tribe to share ... I was already branded with an aversion to the ‘hero’ word.

Even with this holistic concept I question about the ‘elixir’. Who or what had to go without to enable this amazing ‘elixir’ to become available to others? 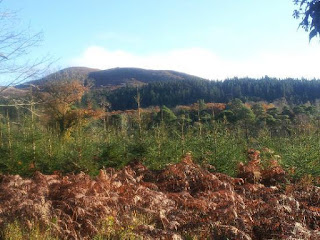 Often the supplier, who has gone without,
is what is called the ‘unsung’ hero.

So to repeat how I started this article, before I take this further.

... before I move into Sheela na Heroes part two. 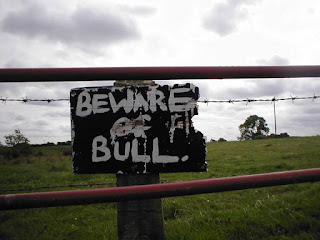