To Hell With The Devil 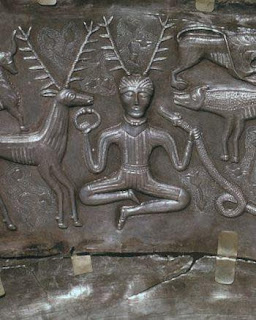 Spoiler alert, quite a serious article here but hopefully an inspiration of where to enjoy more joy than guilt ..

Perhaps the most diabolical belief in the history of humanity is the childish belief in the devil. Are the Devil and Satan images created from human insecurity about our inevitable mortality?

The devil, a symbol of evil,
with ‘evil’ also being a questionable reality,

... is planted into the fertile story impression minds of children. Then in later life devil, satan, and hell, are intellectually indoctrinated into our teen days and adulthood.

Teenager and adults easily overcome their beliefs in Santa Claus, Tooth Fairy, and Easter Bunny, but still a majority of adults remain strong and assertively defending to  protect their beliefs in hell and the devil.

Just mention a slight dis-belief in the devil, and I find that I am drowned in exclamations of blasphemy, and that I need praying over, as I am obviously trapped in the devil’s clutches. 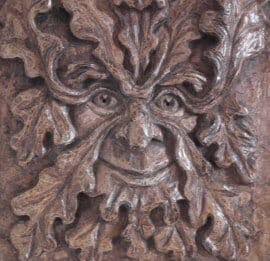 Any choice to change belief in the devil ...

... like we changed our beliefs in Santa and Tooth Fairy, is in the hands and minds of the believer. Nothing we say can change that.

What seems ironic is that the believers of devil and hell seem to be actually imprisoned in a devil’s realm through their belief of it’s existence.

I would think that belief in devil and hell is an entry into hate, or at least quite a focus on it. The minimum effect could be judgement and discrimination.

A strong belief of mine is that love cannot flow freely with any judgement and discrimination in it’s way. Its as if the love conversation is, “well I love ... with the following conditions and exceptions”.

Another point I ponder and ask, “Is the devil a parasite of patriarchal thought with intent of gaining power through fearmongering?” 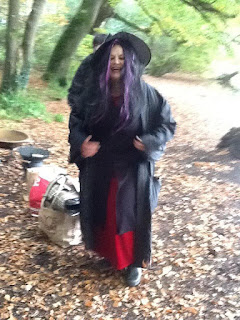 Are we all convinced to be sinners,

... flowing the blood of rage and hate? How do we convince ourselves that we also carry the water of love and healing? ... and that healers are not a chosen few, just because they say so.

Dwelling on fantasies of devil, hell, and sin I feel creates a reality of us living as victims carrying bags of guilt and shame through our lives. We are victims from being told we are sinners born to carry that bag ... and believing that.

Without carrying that victim’s bag we can carry ourselves lighter and have more energy for love and empowerment. Sadly, there is some fear of doing that is being conceited and above our station.

Its us having ‘notions’ about ourselves, and the only way out of that is several years of college followed by some penance time ??? 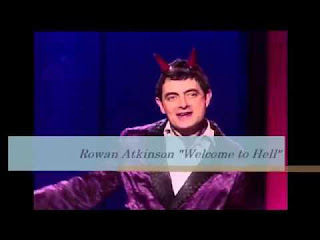 Do we need to live some life of bad to learn to be good?

Indeed, it seems to need a former alcoholic to help an alcoholic, former drug addict to help a drug addict, and former gambler to help a gambling addict. But why do we need to become alcoholics, drug addicts, and gamblers to start with?

Why do we need to wall up divisions between good and bad and ensure others have configured the same boundaries?

How can our lives be lived with an infinite integrity of love. Do we need to live with believing in no love to recognise love? Are we not born into a holding of love?

A happy loving heart may be described by the conservative among us as having a wild heart. To have a wild heart is about re-wilding ourselves, and I have posted a previous article to motivate that. Re-wilding is connecting to the network of love in all things, and this love is not all pampering and calm. It can be fierce to be kind.

No apologies for my blasphemy, but to me ‘hell is a realm of cartoons.

When focused on the question of our spirituality and purpose of divinity, I do not believe we can enter this receivingly while being a victim, possibly through guilt and shame of devil fed sins that we are told we carry”.

My spiritual interpretation is being in a realm of fearlessness. This does not mean leaping around wearing a suit of armour and swinging around a sword and axe.

I suggest consider the folklore and mythology stories you carry to guide your way. Dump the self infliction mythologies , and replace them with creation and co-creation mythologies flowing from the fruitful cauldron of your imagination and consciousness

There’s a poem I share at holy wells and springs varied from one from Robin Williamson, adapted by one from William Blake who translated from a Seanachie in Donegal. With this it talks of 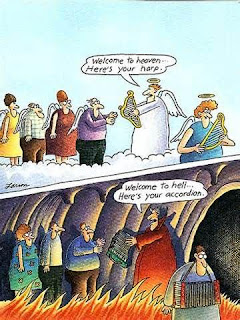 “Hell is a fanciful fear in man’s mind”.

I think it was Herman Hess who talked of ‘The Unwritten Law will Always Defeat the Written One’. His reasoning being that written laws are written by imperfect people.

The ‘Unwritten Law’ here seems to be another reference to that love flow of life without any language of symbol scribing and archiving.

The idea of us being sinners learning to be good has a tinge of encouragement though. It does seem to be a common life purpose for us to discover and share a spiritually healing medicine that gets us over being fearful. Then we share this with others.

It seems to be a need for us to find a way to burn away false fearful beliefs to gain clarity on who we truly are, and we do not need something like scientology to do this. .

What medicine can we bring back to our ‘tribe’ to dissolve away the ‘devil’ in them? Something to tonic up a new creative mythology that can help us break lose from two-thousand-year-old religious prisons that seem to have helped us evolve into being a destructive species.

Love is not fanciful. Its the life that flows through us without boundaries between dark and light just grey shadows and colour tones. Do not let the devil build walls within you. To hell with him. Stoke your fires. Build your bridges.

. A later article for that. One coming around Imbolc.