When Men Form Drum Circles Rather Than Militia 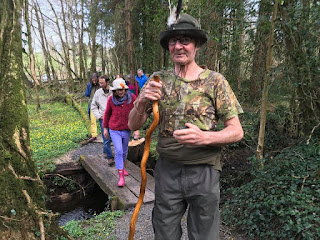 Is armoured masculinity fading away? Are men becoming less motivated and less active in one-upmanship and being guided by rage?

What is the divine journey and deliverance of men?

A child may be afraid of the dark, and we are caring. When a boy becomes man he can so easily become afraid of the light, and then we are not so caring. 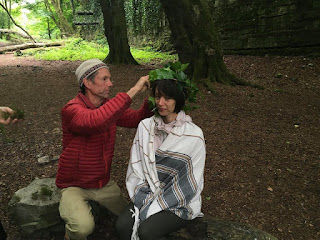 Is there such an existence as the ‘sacred man’?

An unwalled man re-united with an acceptance of being part of nature and not controller of it. A man who changes with climate, and creates a relationship with nature’s integrity as it’s Great Mystery moves through him. 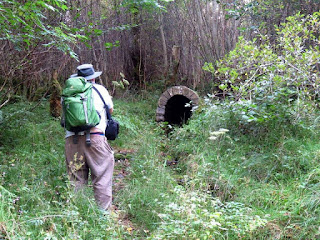 Who is that man who lives with nature first, and as a man second?

Without parochial intent any man is initiated into the guidance consciousness of nature spirit once more.

No longer is there dependence on the independence of his courage, but interdependence with nature’s calling. 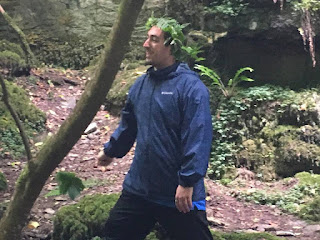 Perhaps he becomes the half man half god of ancient fables.

He is the Daghda, the Lugh, the Aengus, the Midir magician and lover together. The Green Man that all feminine spirit yearns to connect to. Soulcentric rather than ego-addict. The consented seed planter rather than land raper.

The quest to be ‘hero’ dissolved into community. Inner conflict transforming into self-regeneration.

Pride swallowed, and regenerated into tolerance and forgiveness. An awareness that love is not about pacifism, but about honesty. Honesty shared through vulnerable forgiveness, shining a beacon of hope, and this is love.

Love can indeed pain, not from possessiveness and expectations, but from the shock of living truth and its vulnerabilities. Because love is beyond ourselves, lads, and for a devoted patriach this can be devastating!

I feel that ‘sacred’ masculinity can only exist out of the ashes of this devastation. Exist after bathing in the womb of the sí and be born from her again.

Militia men, I believe your ‘time’ is done. Your parochial idols are disintegrating from vision and memories. Nobody will be listening to them soon, after a mass let down of your fake promises.

It is the men in ‘drum circles’, ‘sound circles’, ‘tree circles’, any kind of love and sharing circles, that will empower the earth within their balanced dance with the women and sí. 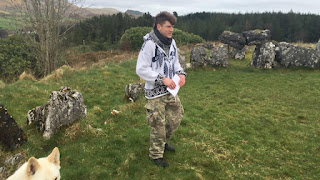 from Ogma's Tale Of The Trees

Ogma was walking through the banqueting hall
when an air of sweet harp music lulled him away from his senses.

When he awoke a branch of rowan was beside him
with white blossoms on it.

Later, he was attending court
and took the branch of rowan
that he placed into the gathering fire.

The fragrance of the blossom
entered the lungs and the blood of the hearts
of all men present.

And from that gathering fire
a beautiful women appeared
and radiantly poured light upon them all.

Gently she spoke
as white bronze formed beneath her feet
and the court of today's warriors and tomorrow's heroes
became a home of kindness toward her.

And there a tall rowan tree that had always been barren
filled its branches with flowers,
and on these branches birds gathered
and shared melody that was infectious.

The warriors became enchanted by the chants of women around them
in harmony with the strings of harps,
woven into bows of rowan branches,
releasing sounds wafting from cauldrons of willow,
attached to the bows of rowan that were strung together with bronze.

Within this circle of men in court
there is now no grief, no gripe, no treason.
Away is the favoured haunt of pleasure!
No taunt, no threat, no maladdiction
when this sweet music embraces their ears.

No visions of death, no mourning, no sorrow.

As a dragon's fire ignites in every heart,
and every dragon's tale
is always umbilically connected
to the heart of this one beautiful woman,
in the gathering fire,
the same beautiful woman
that resides, courts and judges
at the point where our two worlds meet.

So there we were
after the sun had set
drinking the finest of wines.

With a voice that is no longer
of grief, of slavery, of mourning
but of pure voice from the women of the rowan.

The woman of the rowan
who urged Ogma to make a ship from her branches
to journey west and always be in a land of joy.

Its not to every man that this offer made, by her,
and so Ogma's journey,
in the rowan boat,
and hoisted sails of salleys
became another of Ogma's Tale Of The Trees ...