by John Willmott - June 05, 2019
It was a Saturday, the day after Claire and I visited Bloom Festival 2019. and I became ill. I have been down and up and back down with pneumonia since mid April. I should not have been up and about.

To me, hospital was hours sitting in barbaric torture in A&E with jarring noises, intense lights, verbal conversation in the language of internet trolls, and nothing to eat other than chocolate chip cookies and zero life coca cola. Once briefly seen by A&E doc, maybe a day or two in a bone twisting trolley parked in a draught corridor ... and still no food and a cup of tea. Please, wheel me into the Tree Labyrinth Garden and let me pass on from there instead.

Next morning, I was still at Woodford, Dublin, Claire discovered a visiting doctor service online that could be paid for with our national health medical card, so she phoned to book one on my behalf. 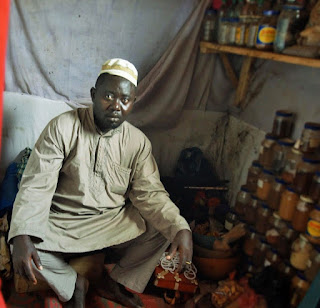 Now, this lad above was not the visiting doctor, but the best pic I could find to sort of set the scene ...

A few hours later, I awoke to a
silent gliding in of a black mirage image ..

I have never seen a black man so jet black, and added to that total black clothes and medical bag totally back as a rucksack moulded into his body. .

After a very warm greeting and best immediate bedside manner I have ever experienced from a doctor since childhood, he got down to business, prod, prod with a “hmmm”, and asked me to join in with an “aaaa” sometimes.

He then gave his diagnostics, pneumonia in left lung, other vital signs ok, heart strong, and wrote a prescription for horse pill size antibiotics and a syrup to extract the phlegm.

What struck me was this man’s powerful intuition ...

... confidence in his intuition, and confidence to use it as his healing. I have not witnessed this since doctors at childhood.

Memories can back of the rural doctor. One morning, as a child, I woke up with arm in pain and stiffness. My father rushed me to the local doc, in the country house, leathery, booky, country life magazine, waiting room.

We were called in, relaxed friendly doc, smoking a pipe, went straight to my arm, called nurse for ‘scalpel!’. I jumped and shrieked, “It’s not that serious!” ... he smiled, squeezed a finger, up popped a little blister, he popped it with the tip of the scalpel, and out oozed a river of gunge, and floating on this, like a white water canoe, a small infected splinter. It was all done ... mainly from doctor intuition.

As I was ready to go home, then get to school, that doc had his house calls to do too.

That’s how it was back then. Lots of routine stuff done by nurses at the village clinic. Not many reasons to visit doctor. If you needed a doctor you was ill and already in bed! Doctor would spend his or her day visiting people in beds, not dragging them out of bed to drive 15 miles to visit them!

A doc in a country house serving a radius of 2000 people or 15 miles, whatever was the smallest. If rural population was dense or two docs wanted to merge to share load, then we had a two doctor rural practice.

Sick in bed, as a child, and the doctor called ...

Doctors were priests, carriers of love, service, intuition, and confidence ... inspiring the patient to instantly trust, connect an be healed by this gifted presence.

This is exactly what happened to me when this gliding black image of a man entered into the bedroom. he was the healing priest, the carrier of the cneas sidhe.

It seems medical services today are no longer medical services. They are a fine tuned template to lure us on board, subscribe to their medicine, so pharmas can pay grand dividends to pay for people pensions so they can afford to join the same tuned medical-go-round template.

It is so Babylonian!

Our human body temple. Preserve the temple. Don’t worry about the water and life draining away back to source, the temple is eternal.  It is sacred! ... until It cannot pay or make more money any more.

Can we have Living Medicine back please?

Are there any doctors left alive to train and mentor this?