Showing posts from March, 2020
Show All

Sioned Jones - A Mentor for Us Growing More Native Trees? 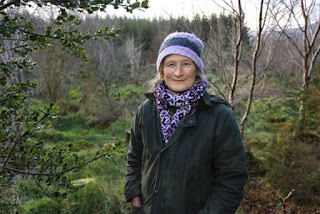 all photos in this article by Sioned Jones Justice or Regime Control? Sioned Jones managed to get attention in the Irish media, and some UK media, despite the media focus being on Coronavirus, USA election, and post-Brexit developments. To recap. the first headline was  'Sioned Jones convicted of stealing logs after 20 years of felling non-native trees in Cork'. Sioned lives in the village of Kilkeal, near Bantry, famous for various ancient megalithic sites and the wonderful Future Forests nursery. On land above her cottage, the state-owned forestry company Coillte planted a plantation of Sitka spruce, a non-native species that Sioned considered to be a 'dark, dank threat to biodiversity'.. So she got a chainsaw and started cutting, and cutting. She cut few trees at first, then dozens, then hundreds. Then in their place she planted native broadleaf trees, birch, hazel, oak, alder, crab apple and rowan. Sioned ended up engaged a 'guerrilla' re-wil
Post a Comment
Read more ... »
More posts